Hybrid mining: what and why?

Public blockchain is a distributed system with the immense volume of users. Distributed ledgers (blockchains) are used to record and store information about all transactions inside the network. No central administrator or authority regulates operations in the blockchain. Decentralization is the main reason why the need for a consensus mechanism with unadulterated votes has arisen.

The network collectively agrees upon the contents of the blocks – basic elements of blockchains. Its community ensures the data consistency inside the blockchain, creates trust (the proof of data consistency), and helps to avoid double spending. Every new transaction goes through the consensus process while the network accepts it. The main aim of consensus is to secure the network and protect it from the malicious behavior of its users.

Most public blockchains utilize two types of consensus mechanisms – PoW or PoS. However, Emercoin blockchain uses both types of consensus – the so-called hybrid mining. To understand what is behind our decision to use this type of mining, first, you need to comprehend the features as well as the pros and cons of these mechanisms. 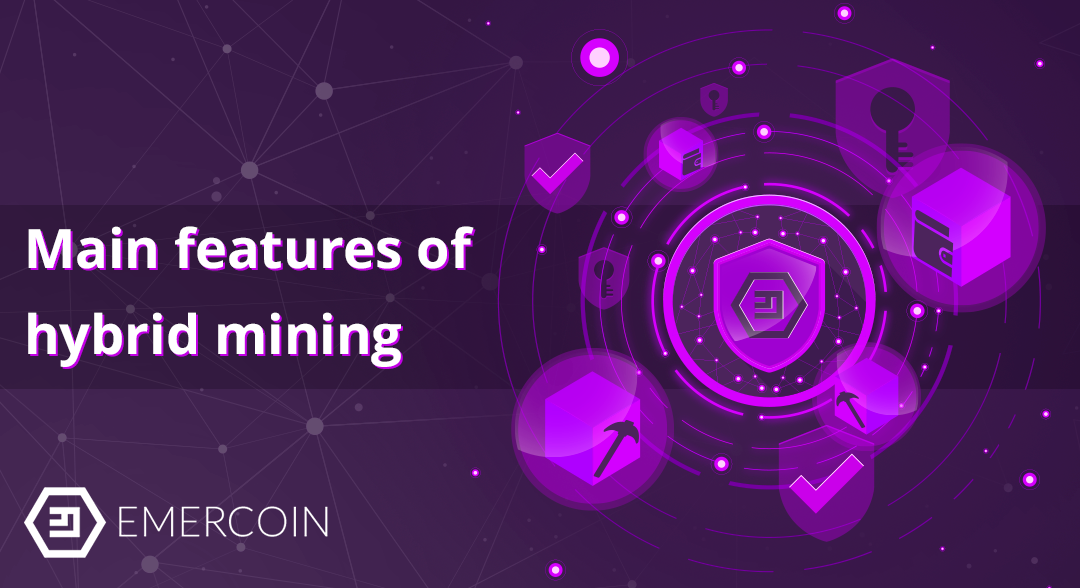 PoW (proof-of-work) algorithm defines the process of applying extensive computer calculations to create a new group of trustless (meaning you don’t need to trust in third-party services) transactions in a blockchain. All computers in the network work to solve a mathematical problem called a hash and the solution is easily verified by the community. The machine that first finds the answer to the problem, hereby proving to blockchain members that it has done a necessary work, gets the right to add a new block to the blockchain. The user receives a reward provided by the blockchain, in case of Emercoin it is EMC cryptocurrency. This type of mining is used almost in all digital currencies and blockchains.

Despite popularity, PoW mining is not impeccable in terms of security, reliability, and usability. Enabling all network members to be actively involved in the development of blockchain, it also imposes some limitations.

The difficulty of generating new blocks is recalculated every 14 days in case of Bitcoin and after every block closing in case of Emercoin. It rises when new and more powerful computers are added to the network. The competition between miners is constant and drives them to upgrade their mining machines with more powerful hardware. The increase of difficulty parameter makes blocks creation more costly and challenging. As a result, those limitations create the need for high powered computers to stay active in the blockchain, meaning those with the most powerful and expensive machines have a higher chance of generating new ledgers and receiving a reward. It is one of the main benefits of PoW mining mechanism and its main deficiency at the same time. Miners need to spend a lot of money and find the most efficient mining machines in terms of energy consumption and computing output to maximize profits in form of cryptocurrency. And only a small part of them has a “real” impact on the blockchain.

The primary mission of the consensus mechanism is to ensure the security of the blockchain and PoW is successful in preventing a Sybil Attack, where users create multiple identities for malicious purpose. However, it is vulnerable to a 51% attack. It means, whoever holds 51% of the entire computing power of the network can manipulate the blockchain. This person or rather a group of people can prevent confirmation of new transactions and even to double-spend currency, creating entirely different blockchain versions (forks). Even though such actions would require massive expenses and would cost millions of dollars, the possibility of such an attack alone still poses a risk for coin holders of all blockchains using this algorithm of mining.

PoS (proof of stake) is another algorithm used by blockchain networks to guarantee distributed consensus, but with a different approach. It is also called minting and considered to be cheaper in terms of required hardware and power consumption.

In PoW, the likelihood of adding a new block by a particular user is determined by the hashrate of that user. In PoS, on the contrary, the chance is determined by the participant’s coin stake. It’s like a lottery where having more tickets means a higher chance of winning. The more coins you have on the address assigned to you (your stock) and the longer they remain unspent, the higher odds of closing a new block and the higher value of your vote to verify transactions.

PoS allows more people to be a part of consensus as they don’t need to buy high-end and expensive equipment. At the same time, it imposes limitations as only users who can afford for coins to lie around unspent have a real chance of getting a reward.

In the case of Emercoin, EMC coin age maturity is 30 days. This means the UTXO (Unspent Transaction Output) must sit unspent for 30 days before its owner can generate a PoS block. However, if you had a UTXO with 1000 EMC and you send 3 EMC to another address, then your maturity time is ressetted and you have to wait for 30 more days for you reward. The maximum staking weight is reached after 90 days. PoS rate is approximately 6% per year and the reward for minting a block is based on and fluctuates in accordance with the coin age.

PoS algorithm is immune not to all attacks. If a user manages to acquire more than 50% of the cryptocurrency within the system, then it is possible to create an alternate blockchain and to bypass all its security protocols – to double spend and to confirm any malicious actions. Though, the possibility of such an attack is very low.

So, why did we combine PoW and PoS in the algorithm named hybrid consensus mechanism? If you read all of the above, you might have already understood the main incentive behind our decision.

Employing PoW and PoS, we’ve created equal terms for all users and enhanced their engagement within Emercoin blockchain. They can use one of the mechanisms or both of them, increasing their chance of getting rewards in the form of EMC cryptocurrency for creating new blocks.

PoS incites users to hold their coins at least for 30 days. They receive additional profit just letting their stock sit and no spending it. Unlike PoW that drives users to upgrade their hardware, they don’t need to spend a lot of money on minting.

The hybrid algorithm has a higher level of security when compared to systems with PoW\PoS consensus. To make any malicious manipulation within Emercoin blockchain one needs to control 50+% of the hashrate and 50+% of all EMC coins in the network. Taking into consideration the required financial resources needed for such an attack, the impossibility of such action becomes clear. Only those with the greatest desire to destroy Emercoin and a few millions of dollars on their account can have a shot at the security of our blockchain.

Emercoin also supports merged mining. When a participant’s mining rig is configured to mine EMC cryptocurrency, it mines Bitcoin at the same time. It means one powerful machine brings double rewards.